Nowadays, sea ice animals are at the heart of debates on global warming. Images of polar bears from drifting glaciers are often used to raise awareness of melting snow.

To view the online exhibition of the Photography Museum on the animals of the ice floe click here. 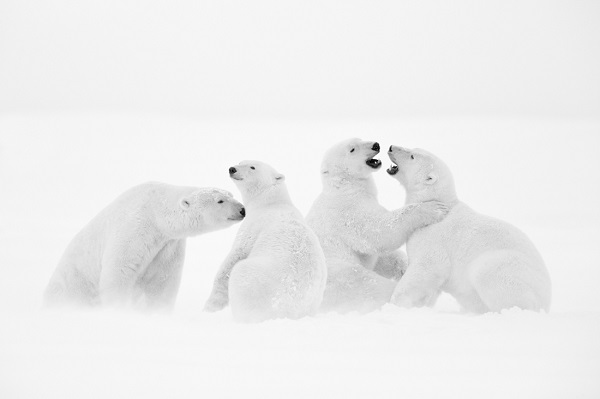 What are the sea ice animals?

Polar species are extremely varied. From killer whales to narwhals, including walrus, all these animals inhabit the ice floes and polar waters. They are all exceptional subjects for wildlife photographers.

Narwhal: the unicorn of the seas

The narwhal is a marine mammal that lives in the Arctic Ocean, in deep waters. It has a small head and a long body. The most remarkable element in its morphology is its horn. The latter can measure up to three meters and weigh ten kilograms.

The penguin: the seabird

Penguins are seabirds that cannot fly. They live mainly in the southern hemisphere, in colonies, and are particularly sociable. One of their defense mechanisms against predators is to huddle together. Their groupings are then photogenic and impressive.

When photographers, like Kyriakos KAZIRAS and Paul NICKLEN, reach out to them, the moment is magical.

Underwater creatures inhabiting arctic waters are favorite subjects of wildlife photographers. Indeed, their large sizes impress and contrast with the grace they show in the water. From whales to beluga through seals, these marine animals are captivating. Their movements were captured by Paul NICKLEN.

The polar bear is the quintessential ice floe animal. Its immaculate coat merges with the whiteness of the snow. His comforting fur makes his photographs soft and soothing despite being the largest carnivore in existence.

Kyriakos Kaziras, The Nap I

The walrus is a marine mammal that evolves on ice floes. It swims less than other marine animals and spends a lot of time on the ice resting. From then on, photographers have the leisure to photograph this giant of the seas sitting majestically on the ice floe.

The ice, a distant and fantastic space to photograph

The pack ice is the theater in which the polar animals evolve. It is a huge layer of ice that covers the polar oceans and offers a unique spectacle. Under the boreal sky this icy desert was the fruit of all fantasies because of its exoticism.

Paul NICKLEN also offers photographs of the sea ice in bright colors. He then delivers a vision that is both intimate and masterful of this space.

Why do photographs of sea ice animals fascinate us?

The pack ice appears to us at first glance as a hostile space. Freezing temperatures naturally frighten and repel humans. However, some animals have managed to adapt to this apparently unhospitable environment and to evolve in it. Therefore, the strength and composition of these polar animals feed our imagination. Photography captures this strength and tranquility of polar animals.

These polar spaces appear to be particularly distant and exotic. Having a photograph of polar animals then makes it possible to bring the pack ice to oneself.

Photographers: new spearheads in the fight against global warming

Photographers who capture sea ice animals are on the front lines of global warming. In particular, by melting ice, they see the impact of the latter on the natural habitat of polar animals. Thus, by their photographs they can raise awareness and warn about the ecological disaster to come.

Stéphane AISENBERG, Paul NICKLEN and Kyriakos KAZIRAS are such photographers. Their photographs of sea ice animals show both the strength of these animals and the fragility of their habitat, the beauty of these spaces and the threat weighing on them. The spectator is then brought to mobilize for the preservation of polar animals.

Paul Nicklen, Spirit of the Rainforest