USA and URSS were opposed in a fierce competition: The Space Race. The Space Race was the odyssey of the 20th century. It started on 4 October 1957 with Sputnik 1, first artificial Earth satellite, launched by the Soviet Union. The next month, it was followed by the first animal to orbit the Earth, still by URSS. The missions and programs by Soviet Union and United-States kept on the rivalry. In this struggle, the NASA (National Aeronotics and Space Administration) played a leading role. This US independent agency was founded the 29th of July 1958 to be in charge of the civilian space program, aeronautics and aerospace research. Three key programs allowed USA to send the first man on the Moon: Mercury (1958-1963) sent the first American in space, then, 25th may 1961, in the middle of the Cold War, John F. KENNEDY launched the Apollo program (1961-1975). During his famous speech he declared:

The purpose is simple, to counter the soviet claims in the space race. In parallel of the Apollo program, the Gemini program (1963-1966) allowed the American astronaut Ed WHITE to experiment their very first EVA (Extra-Vehicular Activity) on the 3rd June 1965. In this technologic and human challenge soviet cosmonaut Alexeï LEONOV beat them, with a first EVA on the 18th March 1965, about 3 months before US astronauts. Ed WHITE became the first American to do an EVA and stayed outsite twice more time than LEONOV.

After several space flights realized during the Gemini missions, the NASA aimed to send the first man on the Moon. They encountered success the 21th July 1969, an historic date when Neil ARMSTRONG and Buzz ALDRIN became the first men to achieve this exploit during the Apollo 11 mission. For the occasion, camera equipments were brought on board. It was thanks to Hasselblad cameras that the first photographed by human on the Moon were taken. Then, the missions Apollo 12 to Apollo 17 were the occasion to deploy new scientist devices and to obtain lunar samples. The vintage prints of these iconic moments are among the specialties of the photo gallery GADCOLLECTION, the most important one about NASA vintage photos. It is a Parisian gallery dedicated to photography, that mades its duty to make at your disposal its knowledge about this modern odyssey. Its goal is to exhibit its finest findings: vintage photos in perfect conditions. 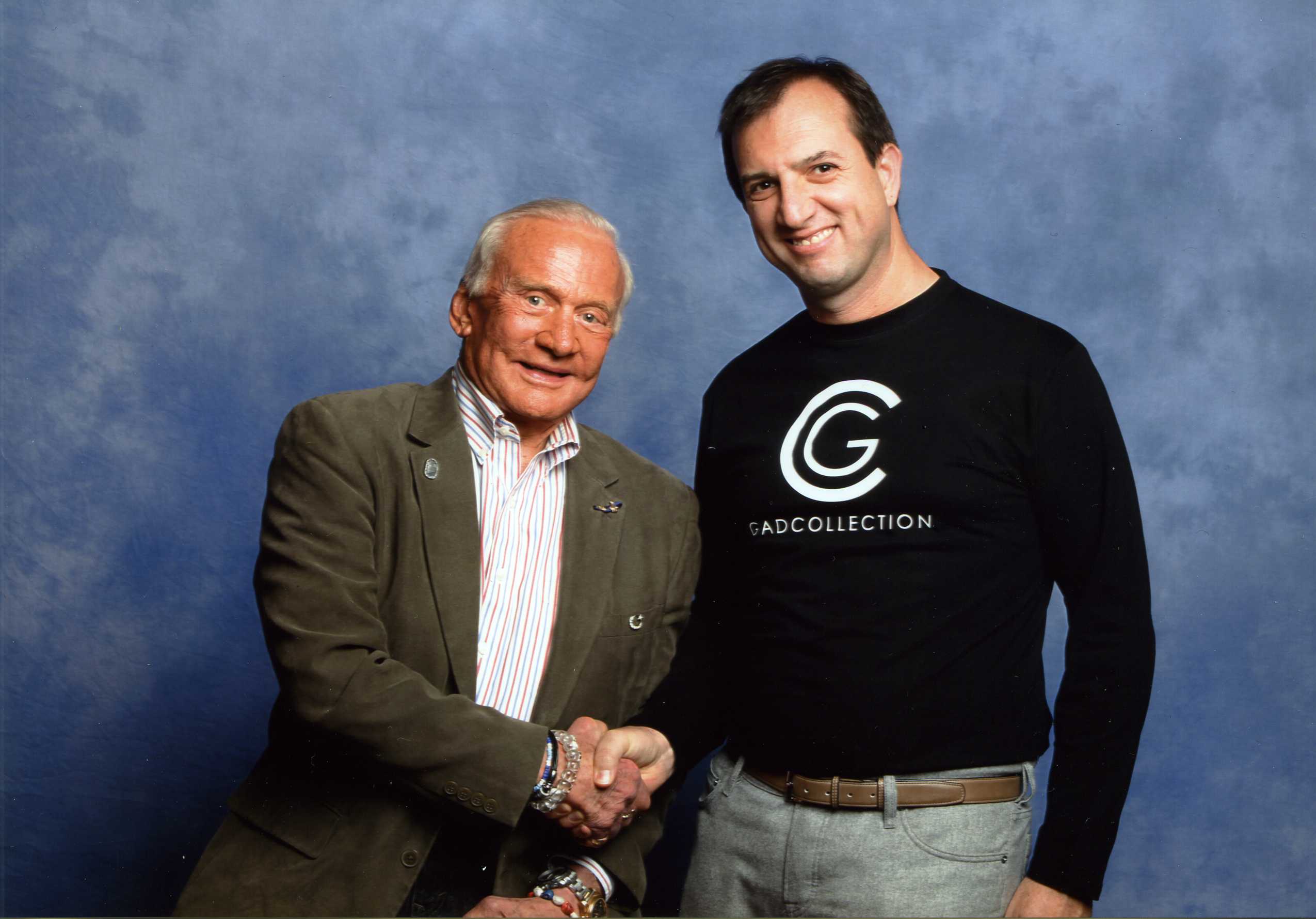 Meeting between Buzz ALDRIN and Gad EDERY where Buzz congratulated him about his works about NASA photos.

How do you know it is an original NASA vintage print?

It is a legitimate question. Knowing if it is an original vintage prints you have in front of you is an arduous work for untrained eyes. Gad EDERY, director of the GADCOLLECTION Gallery, has been interested in NASA photographs for more than twenty years for his personal collection. He acquired a precious expertise through his experience of collectors. Paper analysis, information about the printing and provenance allow him to determine the origin. The GADCOLLECTION Gallery proposes only exceptional NASA pieces, in perfect conditions, that are both inestimable historic witnesses, photos with high esthetic dose and, their original purposes, documents with scientific and advertising vocations.