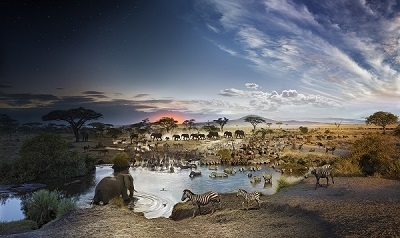 For a long time in the West, animals were seen as devoid of emotion. Althought this idea may be still present, the masters of wildlife photography contradict it. Passionate photographers take us all over the planet, to discover wildlife and to give us a glimpse of how much closer humans and animals are. We invite you to discover the photos of these great masters of the genre.

A brief history of animal photography

From the very beginnings of photography Nadar and his brother photographed animals. Nadar goes so far as to invest himself a lot in the Society for the Protection of Animals and tries his hand at equestrian photography. If you would like to know more, we invite you to consult the beautiful BNF exhibition. For their part, scientists Jules MAREY and Edward MUYBRIDGE are studying horse racing. They break down the movement thanks to the images obtained by chronophotography. The animal fascinates, it is photographed from every angle.

These days, wildlife photography is a genre that comes in both color and black and white. It requires great patience, persistence and a real gift to grasp the psychology of animals. The greatest photographers, at the forefront of which Peter BEARD, but also Nick BRANDT, Kyriakos KAZIRAS or Sebastião SALGADO, work to protect the flora and fauna. They want to raise awareness and amaze with their images.

Between tenderness and majesty

Franco-Greek photographer Kyriakos KAZIRAS is one of the great masters of animal photography. The GADCOLLECTION gallery has the honor of presenting his work, well known to animal friends. Through its lens Kyriakos KAZIRAS immortalized the inhabitants of the African savannas: rhinoceros, giraffes, lions and elephants are represented in majesty, in the midst of their natural habitat.

The more Kyriakos KAZIRAS approaches the animal, the more it manages to translate a variety of emotions. We gradually move away from the feeling of majesty to go towards the animal, to give it an individuality. His series on polar bears is a very good example of this triple link, between our imagination - with stuffed animals in mind - animal emotions and the individuality of each living being. To achieve this artistic result, Kyriakos KAZIRAS has multiplied polar expeditions for 13 years. His latest project (2019) is visible in our online space: Arktos and has led to a collaboration with Daum.

Photographer Stephen WILKES immortalized many animals in his famous Day to Night series. His photomontages reflect the passage of time, a very clever way to make us think about ​​the cycle of the seasons.

In order to achieve these magnificent assemblages, he positions himself in a place and photographs from this very same point of view for about 24 hours. Stephen WILKES then selects several hundred photographs which he combines. Thanks to that, he manages to bring together the different moments of a day in a single image.

His photographs are present in the most prestigious museums in the world. They are appreciated greatly in large format, allowing the viewer to identify the thousands of events in his compositions. If you want to learn more about large-format fine art photographs and their relevance to wildlife photography, take a look at our analysis about large size photo prints.

Through the eyes of animals

Stéphane AISENBERG is a photographer represented by the gallery. He does not hesitate to get as close as possible to the animal in order to understand this other being. His work is built around the question of otherness. This philosophical concept, developed by Emmanuel LÉVINAS, allows us to understand that it is by meeting the other that we can make an illuminating return to ourselves. The face and the gaze play an essential role.

Note: the funds collected by the sales of Stéphane AISENBERG's animal photographs are redistributed to protect lifestyles that respect flora and fauna. When you offer or buy for you one of his photographs, you also support the defense of these endangered environments. Do not hesitate to explore his work on our site: Stéphane AISENBERG.

Stéphane AISENBERG, You think you know me.

The black and white is used to dramatize the meeting and places the animal in a new temporality. Most of the time, wildlife photography develop a brilliant use of black and white. This type of printing makes it also possible to express the urgency of the situation by linking the subject to the past. Our documentation on art photography and the use of black and white will allow you to discover how black and white participates in the construction of an atmosphere. Photographers use it to highlight specific characteristics, which depends on the genre approached: landscape, fashion, animals or architecture photography.