George TICE is a renowned photographer, who has been focusing his work on the American rural and urban environment. He is particulary attracted to remnant of American culture on the edge of extinction - from the small provincial communities to urban neighborhoods.

George TICE, a 10th generation New Jerseyan, was born and raised in Newark in 1938. He develops his desire to photograph after discovering the albums with family images belonging to his father. At the age of fourteen, he decides to join the Carteret Camera Club. During this period, he wins the second place in the black and white print competitions and from this moment on he decides to make his career in the field of photography.

In 1955 he briefly studied a commercial photography in the Newark Vocational and Technical High School. As soon as he turned sixteen he took a decision to quit his studies and start to work as a darkroom assistant for a Newark portrait studio. 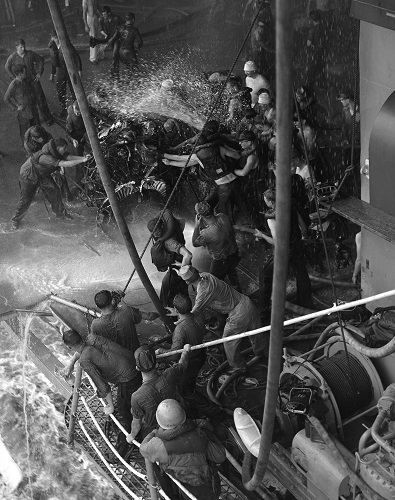 After enlisting in the U.S. Navy at age seventeen, TICE’s talent quickly promoted him to Photographers Mate Third Class. Later he was transferred to sea duty aboard the aircraft carrier, USS Wasp. One of the photos he made on board “Explosion Aboard the U.S.S. Wasp, 1959” was published on the front page of New York Times and acquired for the notorious collection of the Museum of Modern Art by the director of Photography, Edward Steichen. After his navy service TICE worked as a home portrait photographer for the next decade.

In the 1960s, George TICE starts to use the larger cameras, which enabled him to create finely detailed photographs. Very quickly he gains a great reputation. He is considered not only a master of the fine print and a virtuoso printer for his own work, but as well for others for whom he has made fine prints. George TICE is considered as a major contributor to black and white photography.

In the 1969, George TICE meets Lee WITKIN and helps to establish the Witkin Gallery, one of the most successful photography oriented gallery in New York. This partnership with Witkin led to George TICE printing limited-edition portfolios of some of his favorite photographers as Edward STEICHEN, Edward WESTON, Frederick H. EVANS, Francis BRUGUIERE, Ralph STEINER and Lewis HINE.

By 1970, due in part to the commercial success of his works sold through Witkin Gallery, George TICE is finally able to focus entirely on his own photography. In 1973, his book “Paterson” receives the Grand Prix du Festival d’Arles, as the best photography book of the year. The extended photographic project is an important part of the photographers work. The development of each series is an investigation leading to a book.

George TICE carefully reproducing the paths of change in America, concentrating his attention on the human subjects in the context of their environment.

George TICE has twenty-two published books. His first book “Fields of Peace”, documented the life of Amish and Mennonite communities of Pennsylvania. In the late 1960’s, TICE began exploring his homeland and those photographs formed the beginnings of two of his best-known books: “Urban Landscapes: A New Jersey Portrait” (1975) and “Paterson” (1972). His most recent book “Seldom Seen” (2013) is a collection of previously unpublished photographs.

James RHEM states in an article in Focus Magazine, “The stillness in what Tice himself describes as the “sad beauty” of his urban scenes has a different weight, the weight of history, not moments, but stories evolving.”

The photographs of George TICE have been exhibited whole over the world and are represented in the most important international institutions, such as Museum of Modern Art, Whitney Museum, Metropolitan Museum, Getty Museum and Bibliotheque Nationale de France.

Interview with George TICE for his photo exhibition at GADCOLLECTION Gallery in 2019.

You can find his most famous photos in our online exhibition dedicated to George TICE.

Center for Creative Photography at the University of Arizona (Tucson)

1964: The Frank Roy Fraperie Medal in the 32nd International photographic exhibitions at the Boston Camera Club

1987: Inducted into the New Jersey Literary Hall of Fame. Awarded the «Michael» , designes by Michael Graves