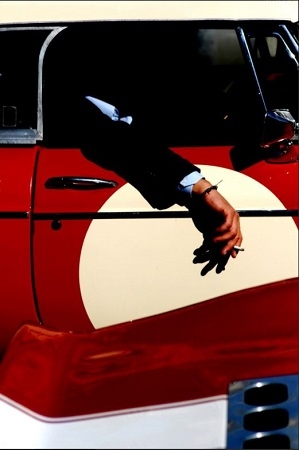 In the age of smartphones and social media, street photography has become particularly trendy. Indeed, taking a photo of passers-by or urban elements in order to immortalize a moment or underline an aesthetic has never been so easy. Although it has never left the art galleries, this photographic genre born at the end of the 19th century is therefore brought to light again today.

What is street photography ?

Street photography is a photographic genre that appeared at the start of the 20th century. These are photos taken outdoors and more widely in a public place, without staging. They have for subject the human presence, immediate or suggested.

Street photography is therefore not simply taking pictures in the street. This genre meets a number of criteria. Photos must capture spontaneous situations, involving visible individuals or not. They must be carried out in a public place in the broad sense (park, street, shopping center, etc.) and bear witness to human activity.

Street photography departs from photojournalism or documentary photography in that it does not convey a political or social message. Its meaning is to represent everyday life. It’s a photograph of the mundane. Historically, this photographic genre has, however, made it possible to shed light on underrepresented social groups.

In Europe, figures like Henri Cartier-Bresson and Brassaï capture Paris through its nights, its streets, its inhabitants. This movement then crossed the Atlantic, was adopted by photographers like Berenice Abbott.

Since the end of the 20th century and the incessant increase in urban concentration, street photography has experienced a new boom.

Beyond capturing a detail, or magnifying an urban space, street photography is above all a photography of the moment. In these spontaneous photographs, the subjects are strangers, passers-by. The purpose of this photographic genre is then to capture a moment of life, an expectation or a momentum in order to immortalize it.

Nowadays, a new vision of street photography is appearing. Many photographers take a more aesthetic approach. Indeed, many attach themselves more specifically to the colors and aesthetics of architectural elements.

Eric Houdoyer is a French Parisian photographer. In his photographs, Parisian life is captured and captured in nuance. By focusing on the gestures and postures of passers-by, it reports on the bustle of Parisian cafes, brasseries and sidewalks. The protagonists are anonymous people with faces veiled in shadow. Their silhouettes and steps come alive in the urban landscape enlivened by red, green and gold lines.

This play of light and shadow creates an atmosphere of mysterious thriller on these photographs. These intriguing street photographs invite projection and the imagination. By anonymizing and mystifying the subjects, they question human activity.

Cássio Vasconcellos : nocturnes around the world

In his Nocturnes (Paris, USA, São Paulo), Cássio Vasconcellos reveals a personal vision of these cities, and of the city in general. He strives to capture iconic monuments and high-traffic areas such as airports or towers. Thus, urban spaces, which oscillate between symbolic and practical spaces, see their two sides represented. By confronting the scaffolding and metallic structures of Sao Paulo, Cássio Vasconcellos confronts his dream vision of the city with a more materialistic conception.

These photographs reveal a complex relationship between the artist and the city. By decentring his gaze on the elements and taking them at an angle, in angles that are a priori counter-intuitive, he paradoxically manages to reveal them.

These low dives are enhanced by bright colors that contrast with the darkness of the night. The work of light then makes it possible to highlight the element seized. From then on the statues come to life in the Parisian nights and the fountains seem to breathe fire.